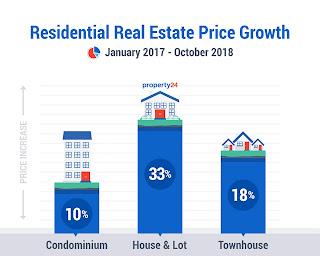 People planning to purchase a new home have a lot to consider, as prices of residential real estate properties have increased by as much as 33% from January 2017 to October 2018. This is according to data from the country’s leading property portal, Property24.


“Because of the numerous residential listings that we have on OLX and Property24, we have access to data that can help consumers make an informed decision if and when they decide to purchase and sell real estate properties,” says Property24 head of real estate Tina Bautista.


In provincial areas, prices of one- and two-bedroom units decreased by 5 percent and 10 percent respectively, while three-bedroom units’ price increased by 32 percent.


In cities outside Metro Manila, house and lot prices increased overall, except for Davao del Norte (22 percent decline) and Cavite (2 percent decrease). Rizal had the highest price increase outside Metro Manila, with 32 percent growth. It was followed by Davao del Sur and Laguna, with 19 percent and 18 percent price increase respectively. Cebu’s house and lot prices also increased by 1 percent.


Townhouses’ prices rose by 18%Lastly, townhouses had a price increase of 18 percent. Davao del Norte and Makati City had price surges of 606 percent and 207 percent respectively.


In the provincial areas, only townhouses in Cavite saw a price decline (-6 percent). In Davao del Sur, these terraced housing had a 53 percent price increase. Laguna and Rizal also had their townhouses’ price rise to 48 percent and 16 percent respectively. Townhouses in Cebu also increased their price by 7 percent.


Price changes are affected by a number of factors, including supply and demand, economic growth, and inflation, among others.
Property24 and OLX Philippines are part of the OLX Group, the world’s leading classifieds platform in growth markets. Having 17 brands worldwide, OLX Group is available in more than 40 countries, where its market-leading trading platforms are being used by more than 330 million people monthly.